All packets arriving at a port are counted and analyzed if they contain test payloads. In addition, selected packets can be retained (captured) for closer inspection using the capture mechanism. 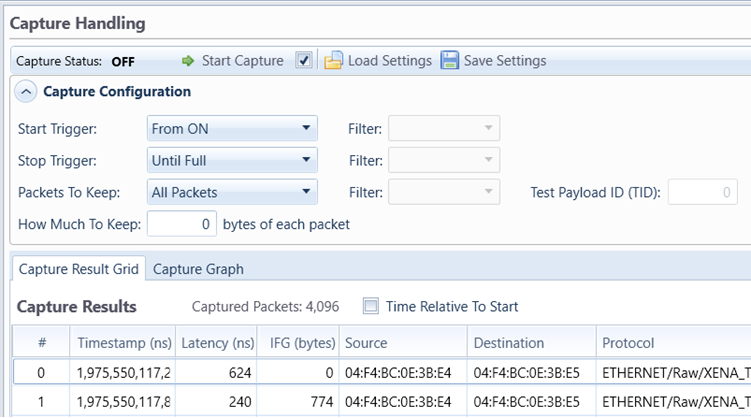 The Start Trigger control when the capture function actually begins to collect packets in the capture buffer. The default behavior is to begin collection when capture is started (aka. the From ON option). Other options include:

However for ports on 10G and 1 G modules, you can select “Stop trigger” “Until User Stop”. This will cause the system to capture circularly, so you always have the last packets received in your capture buffer. I.e.  you start capture, run traffic until it stops, and then you manually stop the capture.

This option control what type of packets to keep. This may help you make the most of the limited capture buffer. Options include:

How Much To Keep

This option specifies how much of the captured packets to keep. Using this option will increase the number of packets you can keep in the internal capture buffer. The ValkyrieManager will always report the total length of the packet even if it has been truncated due to this option.

You can manually start capture on a port by pressing the Start Capture button at the top of the panel. If the checkbox next to the button is checked the Global Statistics Start Traffic button will also start capture of the ports in your testbed.

Each captured packet will be displayed as a row in the Result Grid. The following values are reported for each packet:

If you select a packet in the grid a Wireshark-like packet header view will be displayed below the grid where the packet content can be inspected.

The ValkyrieManager also provides a graphical histogram view of the length or spacing of the captured packets, as well as the latencies.

By using the Save Packets button you can save the captured packets to a PCAP or a PCAP-NG (PCAP Next Generation) file.

You can also launch Wireshark directly with the captured packets as an argument by pressing the Launch Wireshark button. This obviously requires that Wireshark has been installed on your PC.