This area contains port-level controls that affect all streams on that port. They are shown on the stream’s property page for the sake of convenience.

This area contains all stream-level configuration properties, except those related to protocol header and modifier definitions.

The Xena tester will set the Target IP Address in any ARP/NDP request sent from a Xena test port to a value in the following prioritized order: 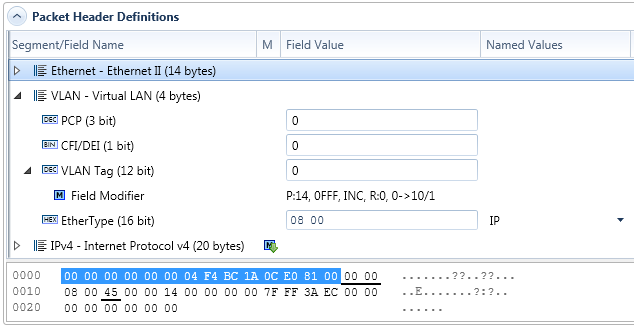 The treeview contains these columns:

Each field row is prefixed with an icon indicating the value representation for the field. The following representations are used:

At the bottom of the treeview you will find a raw hex editor that allows you to inspect and optionally modify the raw hex data for the segment definitions. Any changes you make in the raw editor will be written to the chassis and the associated field value controls will be updated accordingly.

The left part of the hex editor contains an address list and the right part shows the current raw data decoded as printable ASCII.

To add a new segment header to the existing definition press the Add Segment button in the command panel on the right. You will now be presented with a list of known protocol types in alphabetical order. You can select one or more types using the standard Windows [Ctrl-Click] or [Shift-Click] operations. When you are done press the OK button.

With the exception of the first Ethernet segment, you can move segment headers up or down in the list after you have added them. Select the segment you want to move and use either the Move Up or the Move Down button in the command panel to the right.

Any modifiers you have defined in segments affected by the move will be moved automatically.

Select the segment you want to remove and use the Remove Segment button in the command panel to the right.

Any modifiers you have defined in the removed segment will also be removed automatically.

Instead of manually building the segment headers you can instead import the structure from a PCAP file. Note that this operation will replace any segments you may have added manually!

The import function will use any trailing data in the packet as one or more custom data segments.

You can change any field value by using the associated edit control in the Field Value column. For those fields that have a set of well-known values associated, you can also choose one of these values from the dropdown list in the Named Values column.

Finally, you may edit the content of the fields directly in the hex editor panel if you are so inclined.

Certain protocol segment types (such as Ethernet, VLAN and IP) contain fields that indicate the type of the next segment. The segment editor will attempt to set such fields to a correct value when you add, remove or move segments. You can, however, override the value afterward if necessary.

Modifiers are specified directly on the field they are supposed to modify.

To add a modifier select the field you want to modify and click the Add button in the Modifiers section in the command panel to the right. You will now be presented with a window allowing you to specify the properties for the modifier. Press the OK button when you are done.

The new modifier will be shown as a child row under the field row. The value in the Field Value column is a read-only string representation of the modifier settings.

To edit the properties of an existing modifier select the modifier and click the Edit button in the Modifiers section in the command panel to the right.

To remove a modifier select the modifier and click the Remove button in the Modifiers section in the command panel to the right.

The feature is currently only available for selected 40/100 port types and requires Xena software release 68 or higher.

The original payload definition function for streams only allows the user to specify an 18-byte pattern (when PS_PAYLOAD is set to PATTERN). The extended payload feature allows the definition of a much larger (up to MTU) payload buffer for each stream which can be edited as part of the general protocol header editor in XenaManager-2G.

The feature requires that the Payload Mode property on the parent port has been set to Extended Payload. This enables the feature for all streams on this port.

Once the port payload mode has been set to enable extended payload it will now be possible to set the desired size of the payload area for the stream as explained here. This is also shown below. 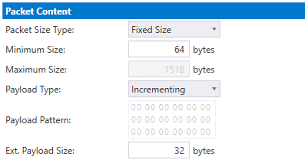 Once the size has been set the equivalent data area will be available in the stream protocol header editor, as shown below.

It is possible to set a modifier in the extended payload area just as it is for a normal protocol field.

The feature is currently only available for selected 40/100 port types and require Valkyrie software release 68 or higher. The CDF feature allows you to define a sequence of custom data fields for each stream. The data fields will then be used in a round-robin fashion when packets are sent based on the stream definition.

The data fields can have both different sizes and different content.

If the CDF data offset is set to a location after the end of the protocol header segments the normal stream payload definition will be used to pad the area between.

The total area available for the CDF function depends on the test module type and the port type configuration.

The feature requires that the Payload Mode property on the parent port has been set to Custom Data Field. This enables the feature for all streams on this port.

This section explains how to configure the CDF function. When the CDF function has been enabled on the parent port a new section is enabled in the child stream property page, as shown below.

The CDF field offset for the stream is the location in the stream data packets where the various CDF data will be inserted. All CDF definitions for a given stream uses the same offset value.

You can edit the first 16 bytes directly in the CDF table view. If your field is larger you can select the field you want to edit and use the detailed editor that will be shown below the table view.

The order of the defined fields can be rearranged by using the up- and down-arrows in the Commands column.

Modifiers cannot be set on Custom Data Fields as the feature itself can be viewed as having some of the same characteristics as the modifier option but on a much larger scale.

Valkyrie is a stateless Ethernet traffic generation and analysis platform that supports all types of performance, QoS, conformance and functional testing at all speeds up to 400GE.

Vantage is a stable and robust Ethernet production line solution with a very simple UI for testing switches, NICs, routers, GPON devices, cable modems, transceivers, cables and so on.

Safire makes it easy to test the performance of enterprise firewalls – with features like antivirus, app-control, IPS and SSL decryption – and document the results in “read-at-a-glance” PDFs.

Chimera is a cost-effective solution for emulating different forms of impairment (e.g. latency and jitter, bandwidth control and shaping) between DUTs in the lab – at rates from 10GE to 100GE.